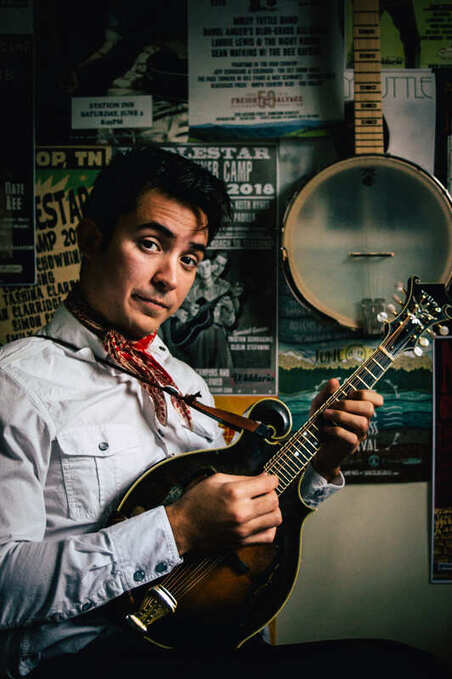 With a signature raw mandolin groove, bold fashion sense, charismatic yet soft-spoken confidence, and keen sensitivity to style and artistic innovation, twenty-six-year-old GRAMMY nominated mandolinist Tristan Scroggins is quickly becoming a highly influential voice of both music and community in the world of bluegrass. An old soul with the drive and curiosity of youth, Tristan is dedicated to learning the history of bluegrass while creating an open and inclusive space for the music moving forward. In 2021 Tristan was honored with a nomination for the International Bluegrass Music Association's Mandolin Player of the Year Award. After a decade of full-time touring with Jeff Scroggins and Colorado, he now lives in Nashville, Tennessee where he has become a part of the thriving bluegrass and acoustic scene and can be found performing, teaching, researching, and writing about music.

The son of famed banjo player Jeff Scroggins, Tristan was raised in the Western United States, between Albuquerque and Denver.  After watching his father perform an original tune at a local festival, Tristan became enamored with music and asked to learn the banjo.  At eight years old, his fingers didn’t take to the large instrument, and he soon found a musical home on the mandolin. At twelve years old, he joined his first band, called the Squash Blossom Boys.  “I remember getting paid $200 for some gigs I did with them”, he laughs, “And I spent it all on candy...I bought a can of frosting and ate it with a lollipop on the way home from Flagstaff”.

When he was 13, his parents split, and Tristan moved from Albuquerque to Denver with his father.  The two experienced some difficult times, sharing a studio apartment with just one bed for some years but “I wanted to be around music, and that meant being around my dad”, he explains.   As Tristan’s playing progressed, he and Jeff began performing together more, and eventually formed a band with guitarist Greg Blake, which became Jeff Scroggins and Colorado.  The band found international successful, touring 300 days a year at its’ peak and appearing at festivals such as Merlefest and Wintergrass.   In 2017, Tristan was recognized for his influential playing when he won the IBMA Momentum Award for performance, and in 2018, the Jeff Scroggins Band was nominated for IBMA Emerging Artist of the Year.

Although he is known for his traditional mandolin chops, Tristan also has a keen interest in pushing the boundaries of the genre.  With his duo Scroggins and Rose, (with Grammy nominated violinist and composer Alisa Rose), he has worked on incorporating classical song forms and arrangements into bluegrass inspired tunes.  “I never really thought of myself as a traditional player, when I started, I wanted to be just like Sam Bush. But when I started playing with my dad, I realized I was going to have to learn to play more traditional bluegrass.  I’m reverent of the tradition, and respect the tradition. At the same time, I’m not going to tear down people who are trying to do something new” he says.

Touring around to different places and bluegrass communities peaked Tristan’s interest in the many facets of the bluegrass community, and the way that the music brings together so many different people.  “My band played the full gamut of bluegrass festivals, and I saw that the tiny rural festivals in Arkansas or Oklahoma are just as much a part of the scene as the bigger Wintergrass or Rockygrass festivals” he explains. “There’s no ‘bluegrass lifestyle’, there’s just a bunch of very different people brought together because of a shared love of the music”.  At the European World of Bluegrass Festival, Tristan found a book High Lonesome Below Sea Level about the history of Bluegrass in the Netherlands.  “I guess I had been drinking and not sleeping much, because I just remember crying as I looked at these photos of people playing and loving bluegrass all the way in the Netherlands” he says.

His interest and love for the bluegrass community led to a desire to research and write about the topic.  “I guess I’m always wondering why all these different people, myself included, love Bluegrass so much?” he explains.  “And if you’re going to ask that question, then it leads to the question, what exactly is bluegrass?’. Tristan launched his blog, entitled The Why Lonesome Sound in 2017 and was soon being hired to write journalistic pieces, on topics ranging from tales of touring for No Depression to a weekly mandolin themed column, featuring specific tune breakdowns for Peghead Nation.  Now, years of studying traditional mandolin techniques has led him to develop his own crosspicking style, inspired in part by the Jesse McReynolds style and yet enough his own to lead hardline bluegrassers to proclaim it “not really crosspicking”.   In 2019, he released a collection of bluegrass standards reimagined in his uniquely developed mandolin style entitled “Fancy Boy”.

With his playing, writing, and general passion for the bluegrass genre, Tristan continues to carve out his place in Bluegrass history.  “I would have had such a terrible life if I hadn’t found this music”, he says. “I feel a sense of duty to honor it, as a way of thanking the music for all that it has given me.  That’s why I’m so passionate about giving something back to the tradition.”​
Powered by